Craft Beer Clarification
We know our craft, and we sure love yours.

American manufacturing took a big hit during the Great Recession, with production dropping 20 percent.  And our recovery, while steady, has been slow: 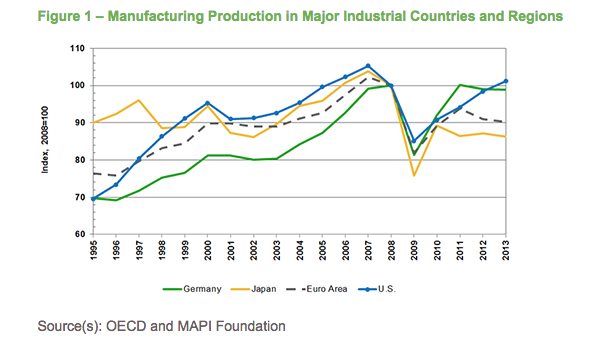 A lot of that has to do with a loss of institutional knowledge: We lost 15% of our manufacturing workforce in the Recession, many to early retirement.  “Now, so much manufacturing has come back from China,” explains Martin Rodriguezacosta,  “but those American workers aren’t coming out of retirement–and neither is their know-how.” Unfortunately, even small knowledge gaps in your fluid management team can create major hassles.

As regional sales manager for Trucent’s largest region, Martin Rodriguezacosta has seen this play out all across the United States:

“That loss of institutional knowledge,” he says, “Is really stretching people thin, and definitely hampering production. One maintenance manager or technician, he can only wear so many hats.  If there is a problem with the fluids, he just doesn’t have the time–let alone the knowledge and experience–to chase down what’s going on. So often, the only option they really have is to stop the line, dump the fluid, recharge and get back up and running as quickly as possible.  But that’s a really wasteful–and really expensive–way to go.”

Even when you do have a good sense of what contaminants are causing you trouble, and where they’re getting in, adding one more piece of equipment to the line can cause more problems than it solves.

A Fluid Management Service is the Only Real Solution

“We’ve had a lot of customers,” Rodriguezacosta notes, “who regret going with the fluid management system they put in because it turned out to be an incomplete solution.  Now the capital is gone, but the problem is still there.”

This is why Trucent has worked so diligently over the last several years to make themselves a broad repository for just this sort of institutional knowledge.

As a result, Trucent is everywhere.  When you are broadly placing technicians in all sorts of operations, under a wide range of conditions, you develop a deep, innate sense of the often intricate interactions between processes, operations, and fluids. You know just how easily something seemingly inconsequential like chewing tobacco etiquette can create maddeningly persistent production problems.

By working with a service, you get to benefit from that deep and broad expertise.  “This is never, ever about just adding one more piece of equipment to your operation.  We investigate, sample the system, locate the contaminant, apply our vast industry knowledge, and put in place our services to keep you running smoothly.  We just take that whole mess off your plate.”